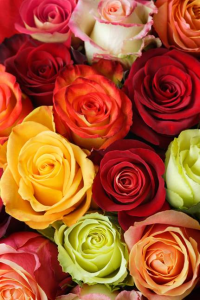 The cultivation of roses in Ecuador has increased over the last twenty years. Its wide-spreading roses are considered to beamong the best in the world with their thick stalks, large buds, and striking colours, together with their resistance after being cut.

Only a few days ago the Financial Times stressed that Ecuador is the third world flower exporter and 73% of its products are roses; “this industry employs 103,000 people and generated a turnover of 837 million dollars in 2013”. As this prestigious newspaper explains, the key to success is “that the roses are grown at considerable altitude with a much longer growth cycle”.

Indeed, according to data from PROECUADOR, the Institute for the Promotion of Exports and Investments which is dependent on the Foreign Trade Ministry of the country, the largest flower production centres are located on sites at an altitude of over 2.000 metres above sea level, where there are more hours of sunlight and the temperature is stable all year round.

Currently over 2,500 hectares are devoted to flower cultivation in Ecuador; the main purchasing markets are the United States, Russia, the Netherlands, Canada, Italy, Ukraine, and Spain.In the latest edition of IBERFLORA, the fair of reference for ornamental plants in Europe that is held each year as part of the Valencia Fair, it was visited by dignitaries from the Ecuador Embassy and Consulate. The authorities from the South American country showed their interest in the event, in the sector in Spain, and in the possibilities of the fair as a export platform for the producers of their country.

For this reason, for the next edition of the event that will take place from 30th September to 2nd October the IBERFLORA management has suggested to Ecuador that it should collaborate with the fair so as to help to support Ecuadorian products with the creation at the fair of a specific “theme zone” for the flowers of Ecuador, and also participate in several parallel activities on which work is being done and in which the rose of Ecuador may show its potential and why it is a world leader.

Although the details still need to be arranged, the idea is for Ecuador to play a leading role in the showcase area known as the “Florists’ Round”, where some of the most outstanding exhibitors and parallel activities of IBERFLORA are concentrated. The International Fair of Plants and Flowers, Landscaping, Gardening, Technology, and DIY Gardening Services brought together 400 exhibitors and some 10,000 professional visitors in its last edition.