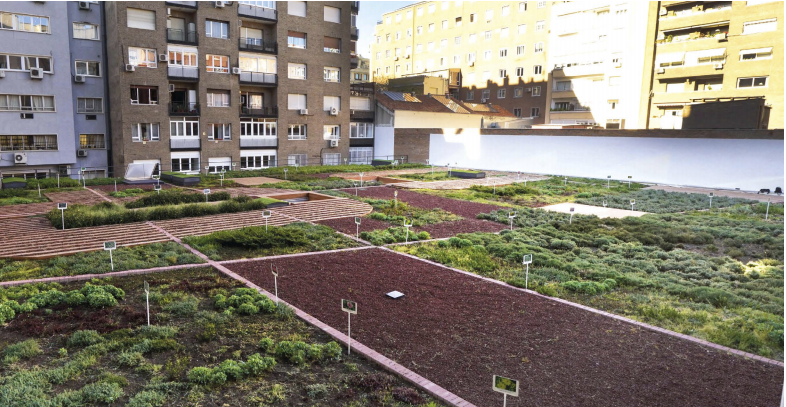 The Valencian supermarket chain Mercadona has spent in the past two years 52 million euros to improve its processes for the protection of the environment.

But since Iberflora We have fallen in love with us especially one of its initiatives, and it is that Mercadona has launched a project that aims to make the covers of its stores (there where possible) in urban gardens, recovering from this way the quality of life of residents, In addition to be able to enjoy beautiful views to peer into the inner courtyards where the stores are located. The newspaper Five days He has published a comprehensive and interesting report on the matter on this project.

By the time the project has become a reality in two of its stores in Madrid, specifically located in the calle Bravo Murillo (Garden opened in June of 2017) and located in the paseo General Martinez Campos (inaugurated in December of 2015), both located in the neighborhood of Chamberí in the capital.

Each of the gardens has been a full investment from a Mercadona 300.000 euros.

To carry out this project of fibre cement roofs are removed to replace them by these roof garden, In addition to relocate ventilation equipment to install in rooms soundproofed within centers. With these actions already two goals are achieved entry: eliminate the noise of air conditioning systems and remove dirt accumulating on the rooftops of shops.

Moreover, from the distribution chain ensure that green covers bring numerous advantages, as the integration of the shop in the environment, pollution absorption and retention of harmful particles from the air of cities, In addition to providing oxygen, reinforce the thermal and acoustic insulation of the establishment and reduce the "Heat island" effect in the city.

According to Mercadona, neighbors include the silence of inner courtyards, In addition to the tranquility of contemplating the garden from their homes. And it is that Mercadona gardens are not open to visitors, but they are designed to provide visual pleasure to the neighbors.

The project is more complex than it seems at first glance: First, we conducted a study in which should take into account the orientation and the hours of sunshine in every part of the roof and every time of the year, In addition to other peculiarities of the space. After the study was the selection of plant material suitable for the terrain, most native species with low water requirements, which also will be installed an irrigation system drip to promote water saving.

Specifically, ground plants have been selected to cover quickly the surface, In addition to vines such as Ivy to cover walls, aromatic, grasses and shrubs that give greater volume in specific areas. To select all of these plants has been taken into account that there are variety of species that can adapt to sunny areas, shade and semi-shade.

Mercadona has also been years collaborating with the Capacis Foundation, dedicated to the employment and social inclusion of people with intellectual disabilities. Thus the maintenance of these gardens, In addition to other green areas located in other establishments of the company as a vertical garden of the Mercadona's Street Asura (Madrid), It has been performed by personnel of the Foundation.

The supermarket chain is studying the expansion of the initiative to other locations, due to the success that the project has had in their first years of life.